Artchat recently got the chance to catch up with local Artist David Hinchliffe on his return from overseas, before his upcoming exhibition at Red Hill Gallery, Brisbane to ask him a few questions about his recent trips, stunning artwork and love of home town Brisbane.

AC:  What was the best moment of your recent trip to France?

DH:  Paris is such an extraordinary city; it’s hard to think of one single ‘best’ moment. One of the highlights was discovering a 5 storey building on Rue de Rivoli which had been ‘colonised’ by young artists. They are groups of artists who have set up on each floor decorating with crazy designs, creating their art, and selling their art.  It was like stepping back in time to the end of the 19th century and the Fin de Siecle when so many artists from around Europe gravitated to places like Montmartre and the Left Bank, to set up little colonies of artists who supported each other and drew inspiration from one another.  There were also amusing times when for example, I set up my little easel on a rubbish bin to paint the historic Odette Café. I noticed someone coming closer and closer and assumed they were wanting to get a better look, until they finally tapped me on the shoulder and politely asked if they could put their rubbish in the bin I was using.  Another time when I was painting outside the equally historic Café Les Deux Magots, one of the patrons came over and provided me with one of their splendid espressos, such a civilised thing to do.

AC:  How does light influence the colour and compositions of your paintings?

DH:  Light is everything to my work. My very first full-time job was as a newspaper photographer and it was there I came to appreciate the dramatic impact of light, particularly backlight.  It changes the mood of the subject and therefore of the painting. I realised when I came back to Australia from my first overseas trip that light in this country was extraordinarily different from light in other countries.  Painting has heightened my powers of observation; it teaches me to observe closely. Light is a major influence on my work, I often think that if I’ve captured the light right, then I’ve done my job as an artist.

AC:  Who inspires and influences your artistic technique? Or is it something you have created yourself?

DH:  Interestingly the artists who inspire me are not ones who influence my technique.  The living Australian artist I most admire and who inspires me would have to be Ben Quilty, whose work is so powerful and saturated with expression, however my work is so different from his.  I always admired Jeffrey Smart who died recently.  Smart trained us to look at the urban environment around us and see beauty in unexpected places – the airport tarmac, a construction site, a 60’s high rise. Places you would never have expected inspiring an artist to paint. My technique has evolved quite independently of the artists I admire.  I aim to capture the atmosphere and hopefully the ‘feeling’ of a place. In that respect, my work probably owes something to the ground-breaking movement of the Impressionists. They wanted to create an impression. I want to create a mood or an atmosphere. 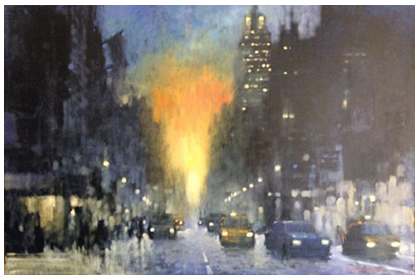 AC:  Do you have a favourite artwork from your recent show in New York at the Michael Ingbar Gallery?

DH:  I’m the only person I know who visits New York hoping to get at least a few days of rain.  I love New York in the rain – all those umbrellas, all those people rushing around looking for taxis or shelter, the brilliant reflection on the watery pavement of those tall buildings and bright lights.   That’s the stuff that inspires me about New York and what I try to capture in my paintings.  My favourite painting from that exhibition would have to be the painting I did looking down on people rushing around Times Square under their umbrellas.

AC:  On your recent trip overseas, did you discover another you?

DH:  This is my first overseas trip since turning 60 in April, so now I’m a fully fledged ‘senior’, although I have to admit apart from my occasionally pathetic knees, I don’t really feel different from the way I felt as a 30 year old.  I guess painting is a sort of exercise in self-analysis and self-discovery.  I spent a lot more time this trip painting in the open air, particularly in busy Paris. Painting with people milling around and making comments and generally looking over your shoulder is a bit of a test of who you are as a person and as an artist.  There were days when I welcomed the attention and then there were times when I really wished they’d just politely disappear.  I guess every artist is entitled to their moods.

AC:  Paris, Brisbane, New York, what inspires you to paint these cities?

DH:  It sounds a bit flowery, but these are all cities I love.  I’m 100% urban.  I love inner city environments.  I think that’s partly what drew me to my previous career as the Councillor for the inner city of Brisbane. I love understanding what makes cities tick.  I enjoy the buzz of the city, the energy of the people who inhabit it, the play of light between the buildings, the narrow laneways, the shadows pedestrians cast on the footpath.  There’s so much vitality and movement in these amazing cities.  Of course each city is different and I hope that as I grow as a painter, I’ll be able to capture that distinctive essence of each city.

AC:  Tell us about your new acting career! We believe you made an appearance in the 50th episode for Doc Martin. What was it like and how did this happen?

DH:  Ian McNeice is a well-known actor who has played many roles in Hollywood, British films and TV series, but is perhaps most famous for his role as Bert Large in the incredibly popular Doc Martin program.  The Hinchliffe and McNeice families have become good friends over the last few years.  We’ve spent some wonderful times in London, Canterbury, Prague and Brisbane. This time while in the UK Ian and his partner Cindy extended an invitation to Port Isaac in Cornwall where they film Doc Martin.  I went there to paint and ended up as an extra on the set.  The cast, including Martin Clunes who plays the Doc, could not have been more welcoming – and patient.  As far as an “acting career” goes, I’m not expecting Hollywood to call any time soon!

AC:  You’ve come to know another artist by the name of David Hinchliffe who lives in Somerset, England.  How did you meet and what is his work like?

DH:  The internet is an extraordinary place. When I first set up my website, I noticed there was some confusion among people about which “David Hinchliffe Artist” they were actually contacting.  There was one in Perth, whom I’ve not had anything to do with and then one in Somerset in the UK.  I really liked his work and I couldn’t help thinking our styles were quite similar.  We’re both figurative artists, painting the world in which we inhabit.  We’re both now in our 60s and it turns out we do have a common ancestor, although you have to go back more than 300 years to find him.  I’ve visited David’s home and studio on several occasions in the last few years and got to know both David and his wife Patsy.  They are wonderful people and David is a great artist.  We’ve painted together in his studio – the two David Hinchliffes, side by side – and I think we’ve learnt a bit from each other.  This last time I visited I brought one of his paintings back home with me and it now has pride of place next to my other favourite paintings which my father did when he was just a young man.  Patsy and the ‘other’ David Hinchliffe (whom I call David Hinchliffe the Elder as he’s a couple of years older) have become firm and enduring friends. I hope one day we can have an exhibition of “The Two David Hinchliffes”.