Red Hill Gallery are joining the celebrations of the 75th anniversary of the iconic Brisbane Story Bridge with art! 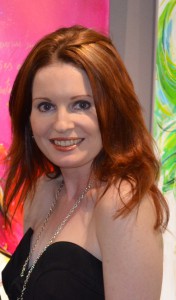 Such vibrant colours and figurative brush strokes are a glimpse of the excitement and celebration to be had at the street party. Her work is available to view at the Red Hill Gallery.

The street party has been organised by the Brisbane City Council with the help of Brisbane Marketing Chief John Aitken and Lord Major of Brisbane The Hon Graham Quirk on Sunday 5th.

This is what they have said about the iconic bridge.

“I’m a strong believer that the river is one of the great definer of our city … The river is really iconic to everything about Brisbane in a good way and a bad way. It’s brought floods to our city and helped define our character as well”, Brisbane Marketing Chief Executive John Aitken.

“For many years the Story Bridge was taken for granted in terms of its structures but it’s got a new lease of life now with the LED lighting and that’s given a whole new public attention and vitality to the bridge, which I think is making it more iconic than how it was viewed”, Hon Lord Major Graham Quirk.

The party will be located on the Story Bridge, with the Eat Street Markets relocating for the special event. The bridge will be closed for motorist but alternatively you can climb it!

“Story Bridge 75 will pay tribute to the much-loved and recognised icon and the significant contribution it has made to shaping Brisbane’s identity,” Lord Mayor Graham Quirk told Brisbane Times.

Starr’s artwork captures the grandeur of the Story Bridge and her series to celebrate its anniversary is a wonderful reflection of the importance and significance of the bridge in Brisbane’s history, culture and people.

Make sure you visit Red Hill Gallery located at 61 Musgrave Road Red Hill, Brisbane to view an artistic interpretation of the celebration for the 75th anniversary of the Story Bridge.