Artist, John Maitland, shares his experience on painting Cats for this exhibition.

Painting cats is something very new for me, but I found the challenge very interesting! My first response was to research the history of the bond between people and cats.

The fire was lit when I heard the poem Pangur Ban (the White Cat) which gave me a greater understanding of how close our relationship has been with these little animals, and just about for ever….As the poem illustrates, the illustrator  and scholar  working on the illuminated manuscripts by candle light and Pangur Ban his sole companion, the cat, keeping his environment free of pests . They are both looking after each other’s interests and the scholar’s biggest need is the companionship offered by the sleek, purring, lightning- like assailant of the small inhabitants behind the monastery walls!

The second inspiring moment arrived just before Christmas when my daughter’s Tom cat (apparently) gave birth to a litter of kittens.

Archie my grandson, aided and abetted by granddaughter Sarah, organised a fitting and proper and very comfortable nursery for the tiny newcomers……on the best chair in the house! It was all pink and grand until, with only one kitten left, the temporary protective seat cover was removed ….. unveiling the fact, it had been very ineffective. 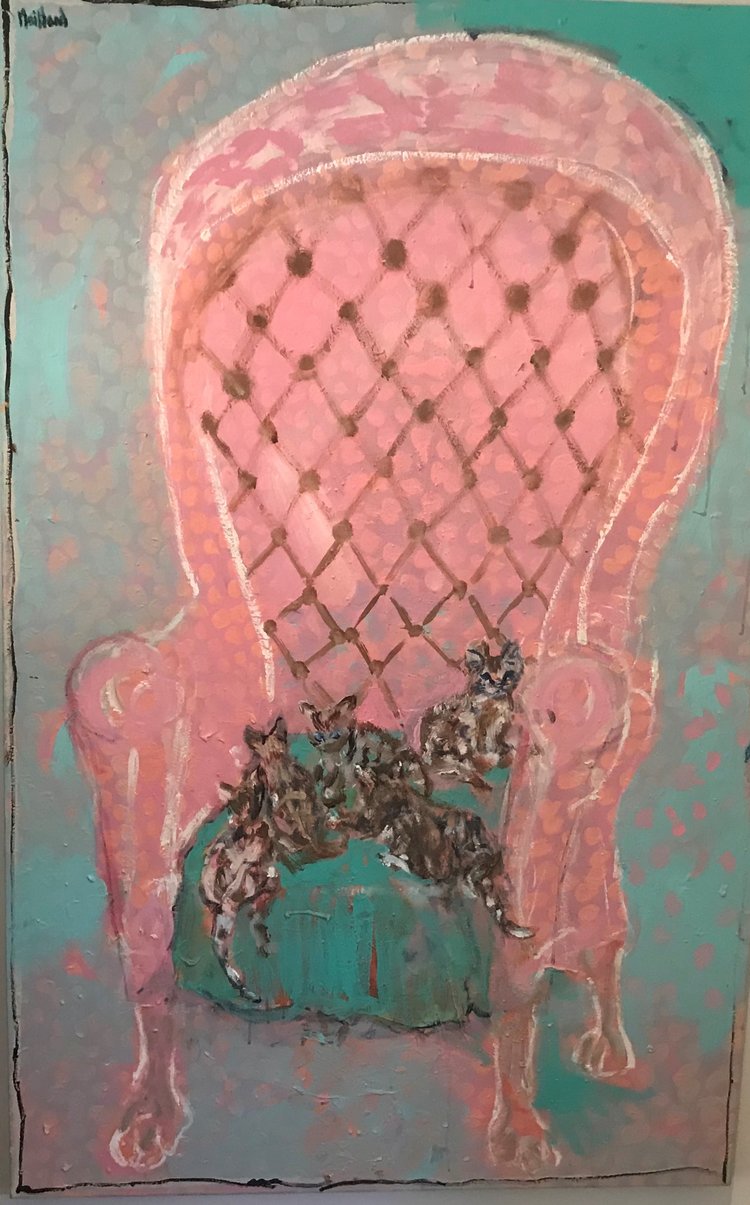 The next painting, I made was “The Last Man Standing”. As the other kittens had now gone to new home, the chair had to be reupholstered and is showing off the family’s brand-new addition, the one no one else wanted.  Jeffery is pictured-proudly sitting on his new blue chair.

Hands up any parent who hasn’t heard that triumphant and highly emotional cry!

Everyone’s looked for the missing kitten without success and just when you think everything’s really good the cry rings out…….oh! such joy.

With the other paintings my aim was to capture the “essence “of cat.  Tom speaks for himself, Pangur and friends depicts the subject with his chums doing what cats do and of course Autolicus, fierce proud and aloof.

I think AlOOf is the essence of cat!

This entry was posted in Uncategorized. Bookmark the permalink.